A Team is defined as an any event in which 2 or more people compete together. Team Sports like Football, Hockey, Rugby Sevens and Water Polo are all considered Teams but so are other events like Badminton Doubles and Mixed Doubles, 4x100m Relays in Athletics and Swimming and Pairs events in Shooting as a few examples. Every team must have a team setup in Zeus through this process. Teams are then entered into events and athletes are entered into Teams. It is setup this way so results can be entered against the team rather than against each athlete saving time and enabling the display of results to show the team rather than individual athletes. If an athlete is in a team they will automatically receive the result.

On the Team maintenance screen you add the name of the Team. In the example (5) it is Netball, then add the Sport/Discipline from the drop down list, choose the team Gender – in this case Women. If this was a Badminton Mixed doubles then the suggested Team Names would be Badminton – Mixed Doubles (Athlete Name / Athlete Name) and the gender would be “Mixed”. The Team Gender “Open” means either gender can compete against each other – there are only a very limited number of Open team events and these are generally limited to events in Equestrian, one or 2 Sailing events and Full Bore or Queens Rifle in Shooting – it does NOT mean open age limit. It would be best to add the athletes names as in the case of Mixed Doubles their might be more than one team from your NOC/CGA/NPC competing at the Games e.g. the NOC might win a Gold and Silver in the Mixed Doubles so you need to be able to distinguish between the 2 teams. No need to put anything in the code – this is used for “Results Data Feed” RDF or ODF services. Click save.

You need to add all the teams you have in your team here before an athlete can be entered into the team.

Adding a Team to an Event

The next step is to add your team into the event. Click on Add Event (6). 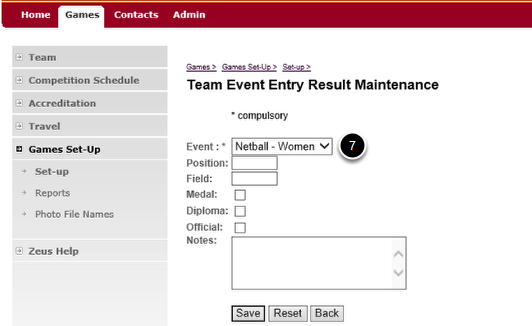 Choose the event (7). If the event does not appear then please contact either Richard de Groen or Ellen Barwise and they will add the event – this is to ensure we have consistency with event names and a standardized approach to event management. The other fields relate to the final result achieved at the Games. For example the Netball Team might finish the tournament in 3rd place, the size of the field was 10 Teams, they won a medal and there are no notes. This section is NOT where you enter the details of the various Games or phases that the Netball Team competed in during the tournament play.